skip to main | skip to sidebar

Wine and hors d'oeuvres opening is from 4:00 p.m. to 6:00 p.m. on June 5th. Show continues through August 4th 2011. Paintings purchased must remain at Beaumont till end of show.

Paintings shown are a small selection of entire show. 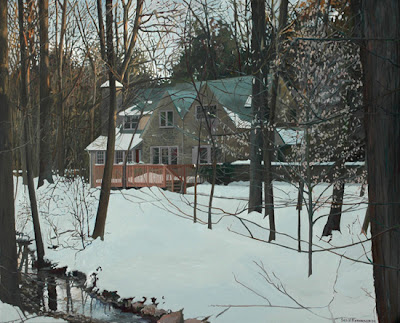 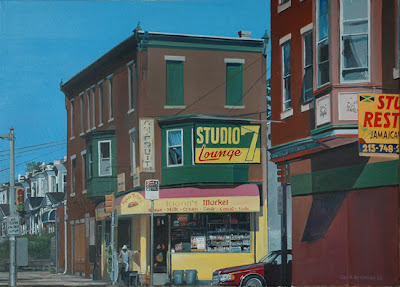 60th and Spruce, though a high crime area, is ripe for evocative and colorful images. Kiana’s Market sits across the street from the Studio 7 Lounge that also houses a Jamaican Restaurant. Much of the rest of 60th Street has been emptied of businesses in recent years.

I love the colors an textures of urban landscapes...as well as signage that accompany’s them. The portrait I’ve painted compresses the scene revealing  the character of the area, and hiding the emptiness created by the desolution of the area. 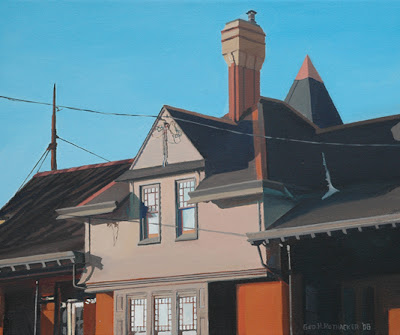 Wayne Station was built by the Pennsylvania Railroad from 1882 to
1885, and the station building was restored from 1998 to 2004 with significant local community support and funding. The year after this restoration project began, the station was listed on the National Register of Historic Places.
The building currently houses the Station Cafe & Juice Bar, which serves coffee, tea, and other beverages in the mornings and occasionally features live Jazz at night.

The most interesting features of the station are its chimney, terret and windows. I had painted the entire station in the past but chose to concentrate on the upper sections of the structure with accents on the deep shadows. 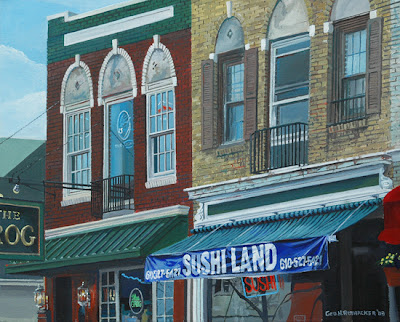 16"" x 26" acrylic on canvas
$1600
The name Bryn Mawr means "big hill" in Welsh and takes its name from an estate near Dolgellau in North Wales. It is the locatedin Montgomery County between Haverford and Rosemont andhas many fine shops along Lancaster Avenue.


Too often people who are shopping don’t look up. Manyshopping areas have beautiful or unusual facades that rise abovethe street level. Bryn Mawr has many of these along the Pike,but I most enjoyed painting the signage and awning. The 69th Street Terminal celebrated its 100th birthday in 2008.
Septa runs its Market-Frankford Subway/Elevcted Line, Bus and
Trolley Lines,and a High Speed  Line to Norristown from the terminal,
It also houses various stores, offices, eateries and a post office.

My family didn’t have a car when I was growing up, so
living in Upper Darby, I was always headed to or from the
terminal. There was a movie house, a dug store and a
market where we shopped on our way home. When I was first
married, I took the trolley from Springfield and Media to
the terminal and the El to work. This painting shows the
elevated crosswalk that was built since I used the terminal,
and the McClatchy Building with its ornate tiling that housed
the offices of ohn McClatchy: the man who built 69th Street. 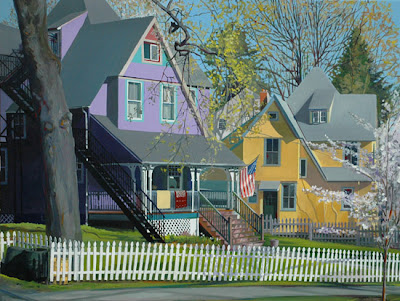 32" x 40" acrylic on canvas
$3800
\
Bloomingdale Avenue is the oldest street in Wayne. The original
buildings are late Victorian and feature deep front lawns and wide
porches. Few of the original homes remain and most have
been modernized. Newman & Saunders Galleries is one of only a
couple that remains unaltered.

Even without the blossoming trees, this painting would be
identified as ‘springlike’. The two easter egg colored homes
situated near the corner of Bloomingdale and Conestoga are
simple structures that retain a charm of days gone by. The
purple house has a small barn in the back covered in old
tin signs....and the lawn is home to a milk cart. 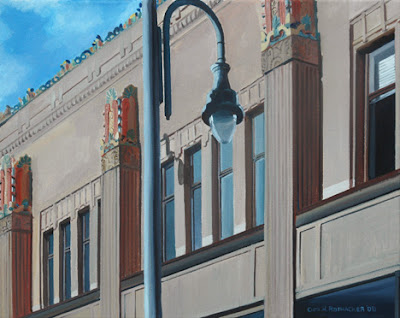 16" x 20" acrylic on canvas
$1800
Many of the commercial buildings in both the Ardmore and Upper Darby commercial districts are adorned with Art Deco tiles and detailings. This former department store in Ardmore has decorations similar to the Anthony Wayne Theatre in Wayne, and the buildings on W. Garrett Road in Upper Darby.

Though the top of this building is left unappreciated by many who pass by it, it’s second floor and roof line are beautifully adorned in the art deco style of the 1920s. Although ornate, the use of it is restricted so the building does not appear gaudy. 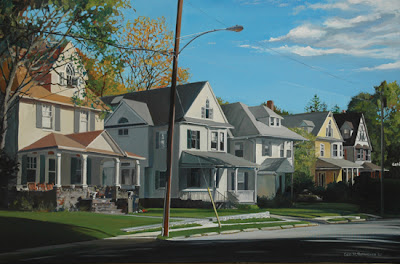 24" x 36" acrylic on canvas
$3200
My father was born on Argyle Avenue in 1911, in a house at the corner of Argyle and Church Road, just a few houses down from those in the painting. In her later years my grandmother lived in a small room in the Argyle Court apartments, just across the street from these houses. 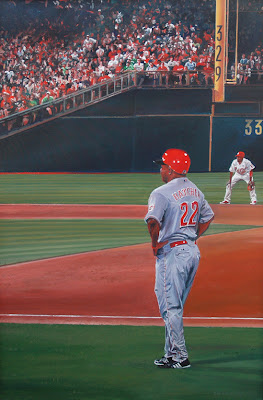 The crowd was huge, and my objective was to capture it in a painting. But one painting wouldn't do, so I painted three.

Each panel is framed separately, making the whole work larger than 6 ft. in width.
Home
Subscribe to: Posts (Atom)

Join Our Email List
Email:
For Email Newsletters you can trust

George H. Rothacker
Since 1978, George Rothacker has owned Rothacker Advertising & Design, a firm that today specializes in creating coordinated marketing campaigns using multimedia campaigns to creatively promote businesses and organizations throughout the country. He is the designer of the “Media – Everybody’s Hometown” logo, and the artist responsible for the Picture Palaces Calendar that raised money for the Community Arts Center, the Media Fellowship House, and the Delaware County Historical Society in 2003, and which featured his theater paintings including the Media Theatre. In addition to the videos he produces for businesses, Mr. Rothacker has produced several documentaries including, in 2005, a history of discrimination and diversity in the United States entitled “America in Black and White and Many Colors,” and in 2008, “Words of the Heart,” the story of Thomas Garrett and his great, great niece Dorothy Biddle James, both of whom fought for human rights throughout their lives. George will be having a retrospect of 45 years of work at the Villanova Gallery in May, 2016.